the lighthouse, as viewed from the boat

It is the reason you would want to go to Capones Island, off Pundaquit, in San Antonio, Zambales. Capones? The island of the castrated? 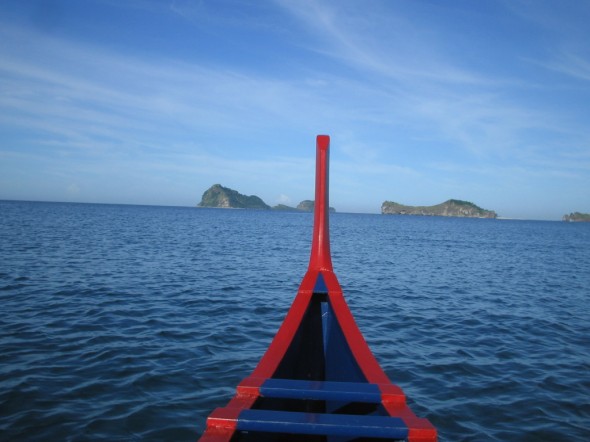 The boat ride will cost visitors P1,300 if coming from the high-end resort called Punta de Uian. But boatmen in Pundaquit proper will charge only P800 for the trip. 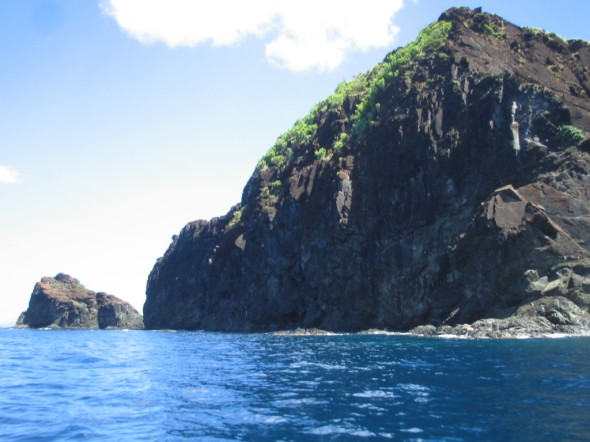 The boat took off from Patio Royal Resort, steered by boatman Joven Orcino. We first went around the nearby Camara Island, and then circumnavigated (feeling like Magellan?) the island of Capones, deciding where we could get off to explore the island. We went to the back, which happens to be the front view of the light house, facing the China Sea. We couldn’t land there – – the water was rough. We went around again and decided to approach the island from the other side. No wharf, we just steered the boat to a small clearing amidst rocks. The boat was so unsteady I had to hand over my belt bag and camera to the more agile boatman, lest I trip and get the camera wet.

From that clearing, we ascended a path that is sometimes rocky, sometimes muddy,  covered with trees and shrubs. I had to be careful, we could fall off the ravine. At some point, we had to pass thru a fallen tree. It wasn’t a very long hike, but it was a rather difficult one for those not used to walking in the bush. 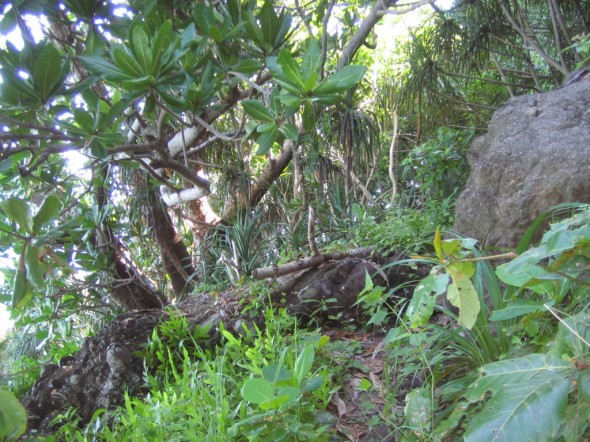 The reward for the “hardship” was well worth it. The light house stood proud, but the caretaker’s place, and what probably were “offices” in the old days were nothing but ruins. Eerie. And yet, one can imagine how it must have looked like in its glory days. Today, it would make a good setting for a horror movie. 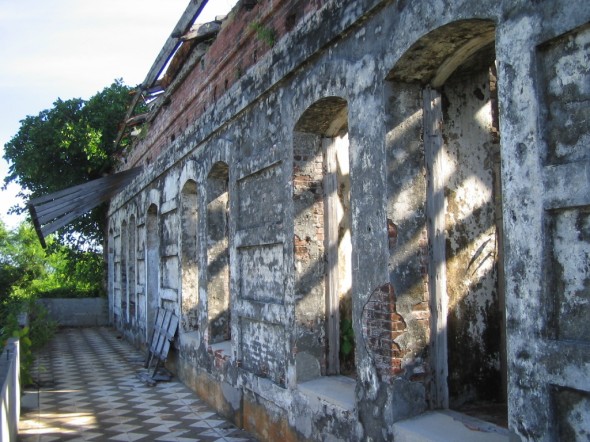 Yet, the view is magnificent. A clear view of the ocean, accented by foliage from the island. Climbing the tower is another eerie experience. The spiral staircase, while looking sturdy, seemed to dance and gives one a feeling it could collapse anytime. I just thought that if it did, its very shape will prevent it from falling, it will just lie on the small space where it stands.

After the spiral staircase came two ladders that seemed to be in perfect vertical angle. This gets visitors to the viewing deck level. But the gate was closed, and the only way to view the horizon was to go up a third, and more difficult-to-manage vertical ladder. From there, one will feel like he owns the oceans.

There are no facilities in the island. I would not even encourage camping overnight, unless you bring everything, including water to drink. I am not even sure if it is allowed. No matter, just being there for a few hours is worth the cost and the effort. I wouldn’t mind visiting again.

Visitors can choose to stay overnight in the various resorts in Pundaquit, or in Anawangin Cove. I have covered these possible accommodations in a previous blog on Anawangin.

2 thoughts on “The Lighthouse at Capones”