I have passed this road many times, and knew there was this church. But it seemed strange that from the main road, it is the back of the church that is visible. That is why I have always ignored it. 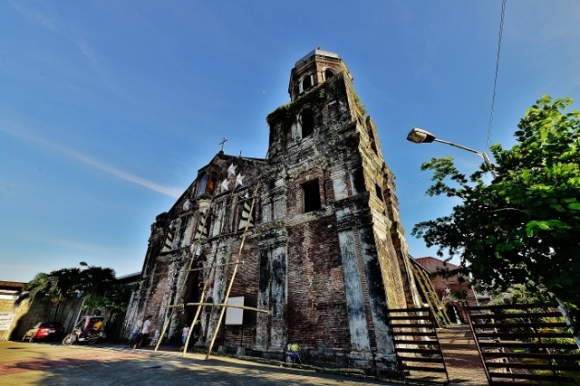 Until one day when I stopped. Since then, I have recommended to friends that they visit this church when they are in the area.

From WIKIPEDIA: St. Mary Magdalene Church in Kawit, Cavite (Parokya ni Santa Maria Magdalena) is one of the oldest churches in the Philippines. It was initially said to be built of wood as early as 1638 through the help of six Filipino families from the towns of Maragondon and Silang Cavite. The town Kawit which was formerly known as Cavite Viejo during Spanish occupation was frequent by Spanish marines and slowly turned into a “Red Light District” and to help solve the bad reputation of the place Manila Archbishop Miguel Garcia Serrano (1618–1629) ordered to place St. Mary Magdalene as patroness of the town. Some people and researchers say that it is possible that she may not be the original patron saint of the town since most of the old parishes in Cavite was consecrated to the Virgin Mary. The Church is known for healing and helping resolve personal problems

The interiors are one of the best in the country

(From wikipedia) The antique and miraculous life-size image of Mary Magdalene in Kawit, Cavite has a “mark” in the middle of her forehead, it resembles a mole and no living local in Kawit knows why the statue has such a mark. Speculations suggests that this is the symbolic mark of Jesus’s finger tips during the resurrection when he had appeared to Magdalene and said Noli Me Tangere (Touch Me Not). Some suggests that this mark is to clearly identify her identity from the Virgin Mary. The statue is traditionally danced in the streets of Kawit as a procession in the month of May and on the eve of her feast day which is July 22, this is called “Karakol” or “Caracol” which is Spanish word meaning “snail”. The statue is a detailed wooden sculpture with carved hair, draped clothing and a pair of silver shoes, she holds a crucifix on her left hand and a jar or perfume on the right hand. The color of her detailed wardrobe is a mixture of pink, orange, gold and a hint of light green beneath the orange draping. Although this detailed carved clothing is not usually seen because by tradition the image is clothed with a gown usually red in color with gold embroideries and orange, yellow or golden cape. The image also has a wig on top of the carved hair, the wig is long and reaches until the hem of the gown, three yellow strips of ribbon (or sash) is pinned horizontally at the gown to secure the wig from being displaced, and at the bottom a pocket that secures the tip of her wig. Only the face and hands are repainted from time to time the rest of the image’s original paint is untouched. 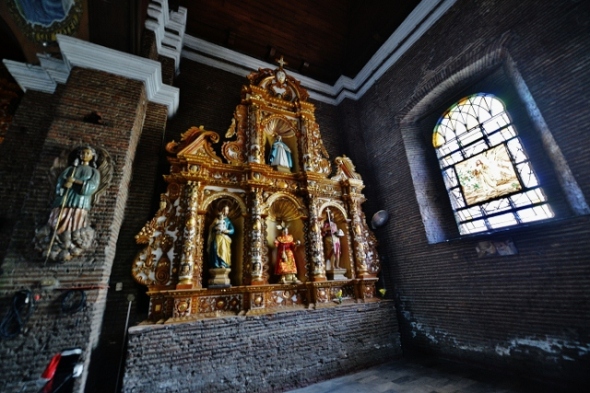 The details are unbelievable

The years have tinted the church’s facade with a characteristic patina, prevalent in the brick walls, making the plastered cornices and pilasters that divide the facade stand out to the eye. The facade is otherwise devoid of any flamboyant decorative elements. The first level is marked off by pilasters into vertical bays. The arched main portal dominates the center of the facade, topped by the seal of the church’s patroness represented by two capital letter M’s. Rectangular windows line the second level. The pediment features a central niche which enshrines the statue of Saint Mary Magdalene. A tall bell tower is attached to the left side of the facade and its lower levels are square. These levels have windows on every side. The top level is tapered and octagonal. All of the bell tower’s windows have arched windows marked by ‘ventanilla’ latticework below the sills. The belfry is capped by a metal dome which is in turn topped with a weathervane. (from wikipedia)

The Church is a favorite location for filming, the music video “Tell The World of His Love” produced for the World Youth Day in 1995 was filmed in the interiors of the church which starred many big stars of the Philippines such as Sharon Cuneta. Recently in 2011 a historical movie entitled “El Presidente” the life of Emilio Aguinaldo was filmed there with Philippine superstar Nora Aunor. (from wikipedia) 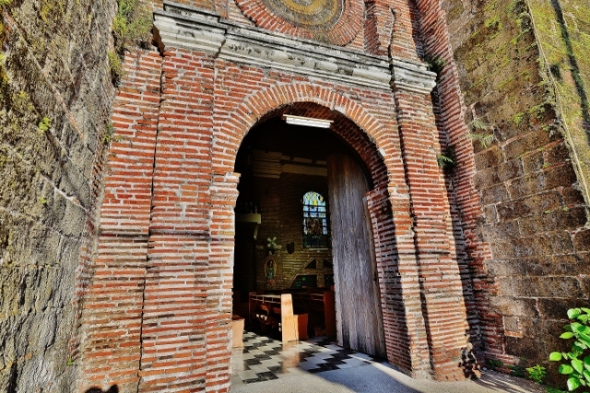 old red bricks at the side entrance

I suggest you visit, too.

On public transportation, jeepneys and mini buses ply this route from Baclaran or Zapote. The church is just past the famous Kawit landmark – – the Aguinaldo Shrine. In fact it is within walking distance.