Unless you live in the area, you will only refer to this church as Bamboo Organ. I remember vacationing friends asking me to join them for “simbang gabi” at the Bamboo Organ. The church is also the venue of the International Bamboo Organ Festival, the longest running music festival in the Philippines. But the church is neither made of bamboo, nor is it dominated by an organ. Of course no church will ever be named after a musical instrument. Ever heard of a Trombone Church?

The church is actually the St Joseph Parish Church. A school also called St Joseph is within the church yard. The church as it stands now and the structures around it were restored in 1975 by Architect Francisco Manosa and his partner Ludwig Alvarez. The church was built by a Spanish priest named Father Diego Cera.

From WIKIPEDIA : “Fr. Cera began work on the organ in 1816, while the church was still under construction. The church was completed in 1819 and the organ was playable in 1821, but without the trumpet stops. The organ was finally completed in 1824 after Fr. Cera decided make the trumpets using metal, musical characteristics of which he could not replicate with bamboo.

During Fr. Cera’s lifetime, disasters such as earthquakes and typhoons damaged both church and organ. Fr. Cera himself was the organ’s first “restorer.”Down through the years, natural disasters continued to take their toll; the organ was unplayable for years. Somewhat unexpectedly reassembled early in the 20th century, partial restoration took place from time to time up through World War II.”

Visit this church when you are down south. If you must make only one visit and can pick a day and time, it is best to attend a simbang gabi when the church transforms into a magical place, all lit up, with the huge acacia tree decorated with hundreds of lighted star shaped lanterns. And many puto bumbong and bibingka stall around the church yard, with vendors dressed in native costumes. 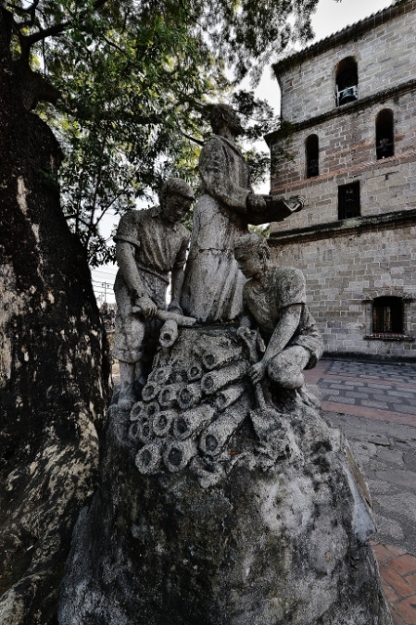 By public transportation, take a jeepney ride from Baclaran to Zapote, making sure the jeepney does not take the “Coastal Road” route. The church sits right in the heart of old las Pinas town.