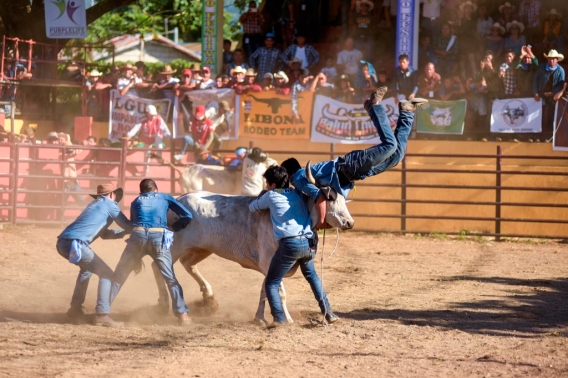 This is the fifth rodeo I attended in Masbate in the past 5 years. And carambola has been a favorite event.

To the uninitiated, carambola is a cattle event where 2 competing teams of cowboys chase 2 heads of cattle let loose in the rodeo arena. The team that first grabs the bull by the neck will have that cattle to wrestle with and bring down, and tie 3 of its legs  with a rope. The cattle must not be able to stand up within 10 seconds, or else the team is disqualified for that game. All teams race for time, and the winning team for the event, like for example in  the 4-man carambola, is that team that does this routine at the shortest possible time.

This particular 4-man carambola I witnessed this year will go down in history as the bravest attempt by a cowboy.

Ever heard of the idiom “take the bull by the horns” ?

Here is what an idioms book says :

take the bull by the horns:  to forcefully attack a difficult situation

Example: ” I took the bull by the horns and confronted him about his drinking.”

Etymology: based on the idea that holding a bull (male cow) by its horns is a brave and direct action.

Cowboy Ace Malate, a 19-year old Animal Science student did exactly that. I was then at the Photographers Gallery when I saw this cowboy take the bull by the horns and did not let go, even as the bull was mightily trying to throw him off. Cameras from the photographers clicked almost continuously realizing the danger that the cowboy put himself into just to help his team wrestle the horse down. My thought balloon was ” My God, I hope he is not thrown off – –  he will be badly injured if this happens. The horns can get into his tummy ”

Here is the sequence, in photos taken by the official team commissioned by RMI. 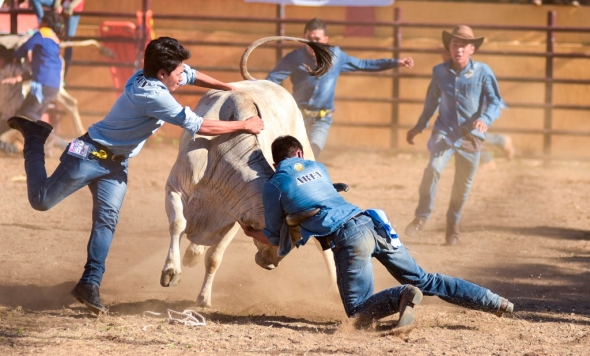 Taking the bull by the horns 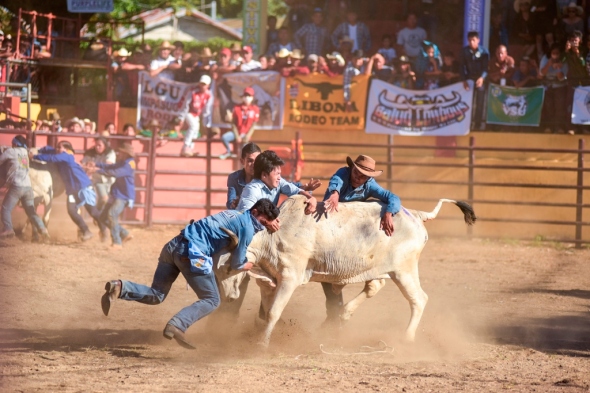 Holding on, feet now off the ground 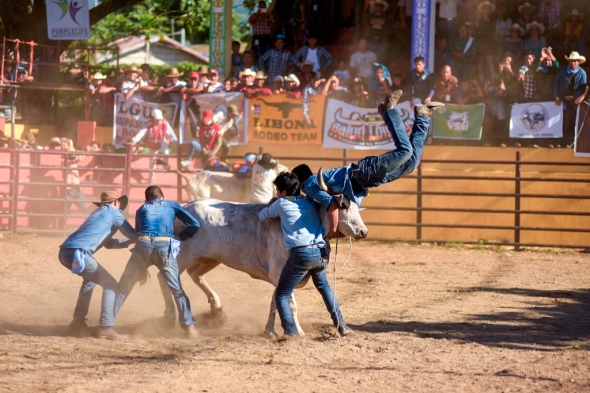 The bull is trying to ward off the cowboy, now horizontal 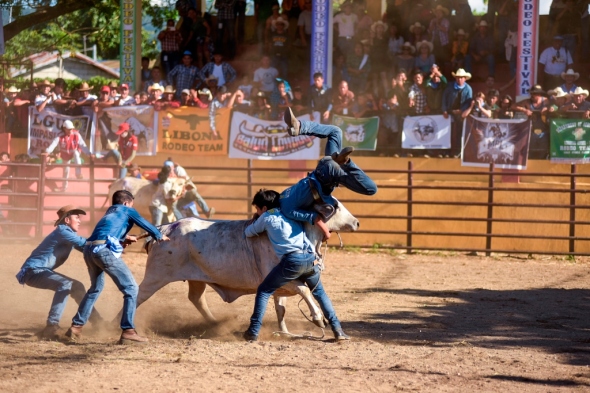 When the group was able to finish its task, I turned around to the photographers and remarked that if anyone had a good photo of that, it could possibly be the winning photo in the Photo Competition participated in by 25 or so photographers.

I also hurriedly went up the stage and requested the barkers Long and Yen to ask the brave cowboy to present himself to the stage for a special cash prize. An instantaneous decision triggered by this awesome display of bravery.

” Right after this particular game with the horns. Guenther (a German cowboy from Munich,  and  a volunteer rodeo official working as timer) reacted  and said that Filipino cowboys are like cats. They have 9 lives. No matter how they are thrown they still land standing up. If the Germans that he knows would do this – – –  for sure they will have broken bones and end up in a hospital.”

Meet the brave Superman Cowboy, Ace Malate.  He is from the team called Association of Rodeo Enthusiasts in ViSCA or AREV of Visayas State University in Baybay Leyte. This photo is taken from his Facebook page, and used with his permission. 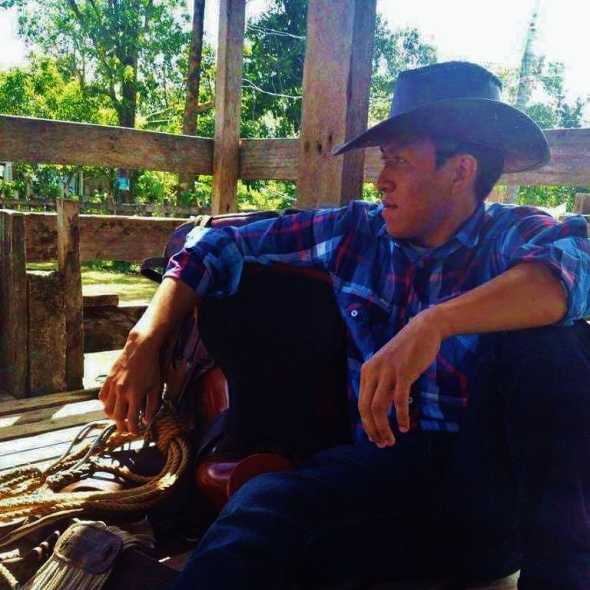 After that feat, the barkers were teasing the next carambola players if anyone would be taking the bull by the horns, like Ace Malate did, for a spot cash prize. But we know this is something that has never happened in the history of Rodeo Masbateno. And probably never will again.