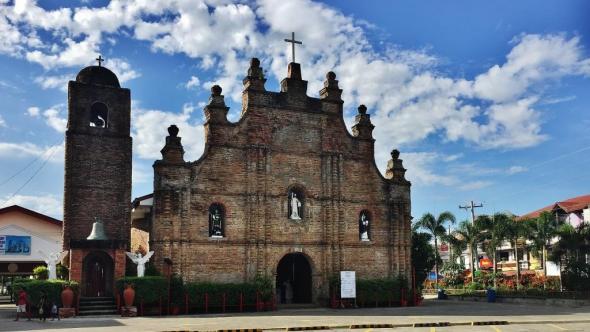 “Atocha is Madrid’s royal shrine: there is not a Spaniard of public importance for a thousand years who would not kneel to ask her help. Her gowns are made from the bridal gowns of queens; yet no shrine better demonstrates how little it matters where we rank in the world or what we do for a living. One of her supplicants asks her for victory for his armies, one for rain for his thirsty fields; Our Lady of Atocha answers all, impartially and lovingly. “( lifted from http://www.roman-catholic-saints.com/our-lady-of-atocha.html)

The Our Lady of Atocha Church sits in the town of Alicia known for its Pagay festival, a first class municipality in the province of Isabela. It was completed in 1849 and has been declared by the Department of Tourism as one of the country’s religious tourist destinations.

As Atocha is Madrid’s royal shrine, Our Lady of Atocha in Isabela looks every inch a Spanish church.

Dominican missionaries declared Cauayan a full-fledged parish in 1741, dedicating it to  Our Lady of the Pillar commonly known as the NUESTRA SEÑORA DEL PILLAR.

The church was first constructed using bricks and galvanized roofing. This was later damaged by an earthquake. 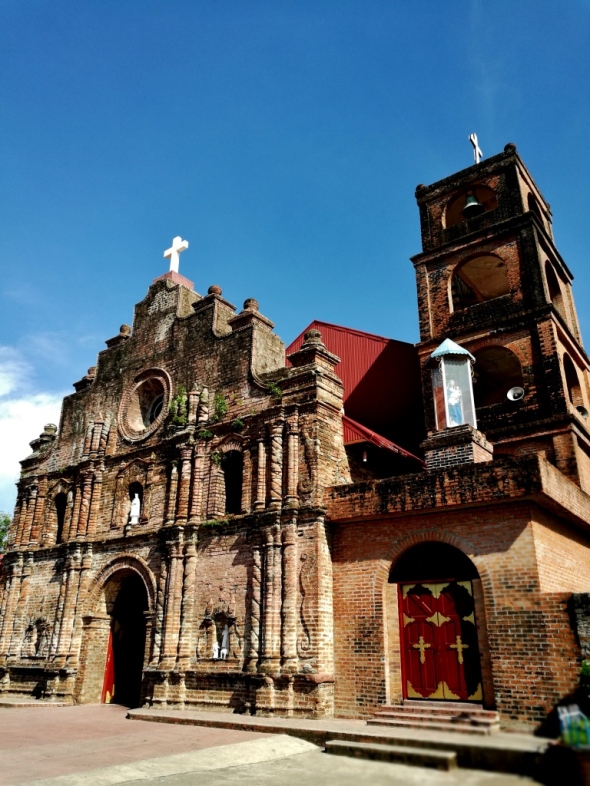 It’s a beautiful combination of old and modern architecture. The exterior part of the church is well preserved while the interior was renovated and glorified with a beautiful painting on the ceiling showing the coronation of Virgin Mary. 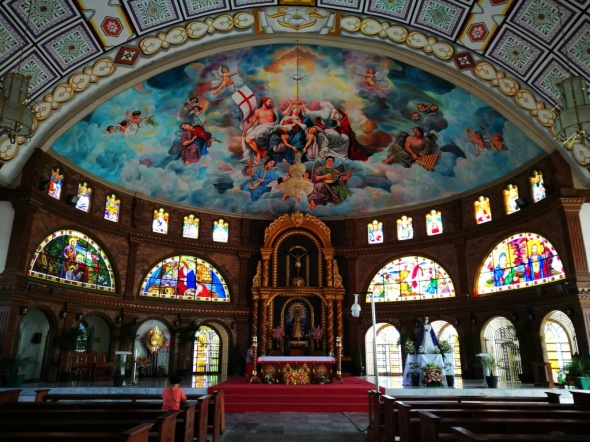 I also took a look at the church from inside looking out into the entrance.

Today, it is a very well-preserved architecture of red bricks, with its imposing facade.

Tracing the history of this modern-looking church, I found out that around 1696 and 1700 Fr. Miguel Matos, OP, built the Ilagan church made of stone and bricks. A typhoon in 1866 destroyed the roof of the church. Desiring to make the church bigger, Fr. Pablo Almazan, OP, demolished the solid walls of the church, which, unfortunately, was never built. The walls of the church today are of modern make. It is known to house one of the oldest bells in the region. The church is dedicated to the patron saint, San Fernando.

The facade is impressive and spacious. This is the only time where I wanted very much to photograph a church that is not centuries-old. I went inside, and the church interiors looked spectacular and grand.

nothing but a facade

Went to all churches in Isabela on a recent tour. I could say all of the churches were interesting. But one stood out.

San Pablo is a second class municipality 21 kilometers south of Tuguegarao via the Maharlika Highway. Travel time is 26 minutes.

This church is the oldest in Isabela and stands out because the whole facade and the belltower, the tallest in the whole Cgayan Valley, are what really remain of what was probably one of the biggest churches in the region. Behind the facade, and actually way behind is a re-built church that still uses the walls of the old church. To think that between the old facade and the new church is a wide area that looks like a patio. Then one would know that the whole church then included the re-built church and this wide front space ! 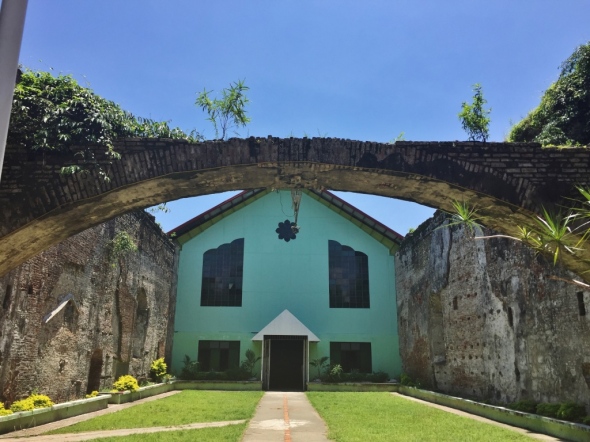 the rebuilt church behind the facade. Note the huge front yard, part of the original church

inside the rebuilt church. Note that walls are those of the original structure, and these walls flow into the empty space in front

the walls from inside the rebuilt church continue into this, now the facade of the smaller rebuilt church. One concludes this space was part of the original structure

the stairway to the bell tower

HOW MUST IT HAVE LOOKED THEN?
In front of the facade is what one will conclude to be the original church frontyard. It is marvelous and eerie at the same time.

When other photographers finally find this church, they will agree – – it is the most photographable church in Isabela.

the oldest, and most photographable

I last stayed in hotels in Cauayan and Santiago in 1978, back when these towns were “tertiary” areas when I was a newbie media buyer, checking on advertising placements on radio stations all over the Philippines. I remember landing in Cauayan airport then when the runway was not yet concrete but land that was just flattened by a grader and with tiny pebbles to harden the grounds. I then visited Bombo Radyo DZNC in Cauayan, and radio station DWSI in Santiago. I also visited Ilagan then. Those were the days.

Now, the hotels in these towns, now both re-classified as cities, are up to par with other hotels in bigger cities. Let these photos tell the story. ( I paid full rate for everything and did not even declare myself as a blogger to the hotel staff) 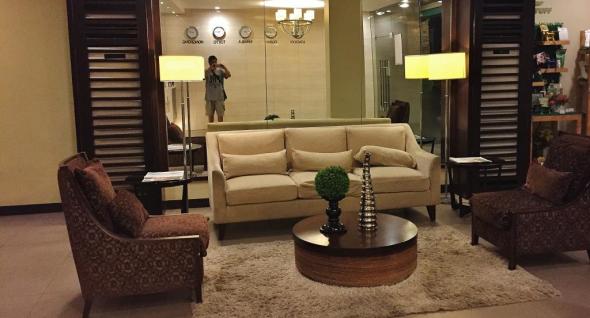 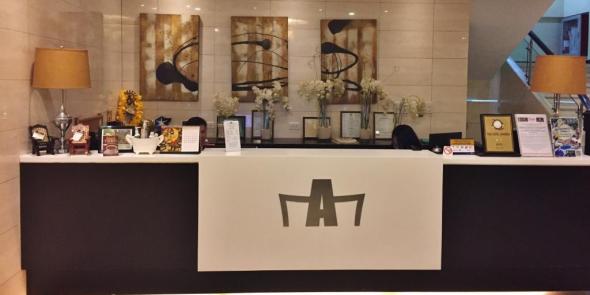 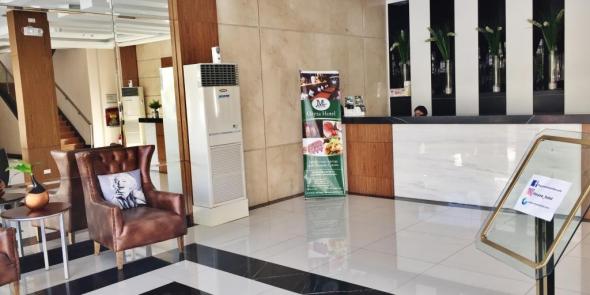 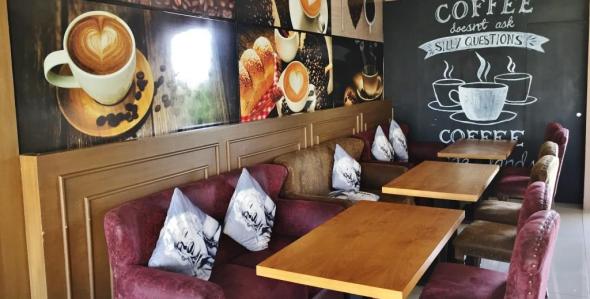