I thought it was going to be an easy ride around Taal Lake.

Mission: Drive around the Lake

In our previous descents, we always took the Ligaya Drive route from Tagaytay to Talisay. The view is fantastic, and the road is good.

This time, we took the zigzag road from the Tagaytay rotunda. A year ago, this was practically impassable. But it is now 100% finished, although some sections were only asphalted.

The 12 kms zigzag road to Talisay starts at the rotunda

At kilometer 59, I saw 2 bridges one after the other, both with strange names. How does Alingayngay Bridge or Pinaglintikan Bridge sound to you?

The zigzag road is about 12 kilometers from the top, ending in Barangay Leynes in Talisay. I have been to this part of Talisay before, countless times, each time having a drink at Gloria de Castro’s picnic place. Or having fried tilapya, ginataang tilapya, or inihaw na tilapya for lunch. And a cold beer while marveling at the view of the volcano at dusk. Aling Gloria pioneered tourism here, accommodating foreigners in her home, earning her consistent mention in Lonely Planet and other travel books.

Barangay Leynes in Talisay, end of the zigzag road

On this trip, we skipped Aling Gloria’s place, and immediately turned right. This brought us to the town of Laurel. I remarked that this spot around the lake is probably the best. It is not as “developed” as Talisay which now has probably a hundred resorts dotting the lakeside.

There is a spot from Laurel where you can drive up to Tagaytay, passing through the area where Splendido stands. We decided to stay within the lakeside. The next town is Agoncillo, and this brought back memories when my friends and I used to visit an officemate who had siniguelas trees in her backyard. But we went to Agoncillo then via Lemery, not from the lakeside. 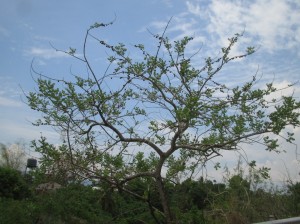 Thus,I never imagined how rough the travel can be. Or maybe because Typhoon Ondoy has just hit the country, and did not spare this lakeside town. Within the lakeside, there were portions that seemed impassable, and the road literally merged with the lake. The maneuver is made worse when the road is on a bend, and you can hardly see where the road would go. And because the Toyota 4×4 Hi Lux is not an amphibian, I felt like we were, at any moment,  going to be submerged in the lake.

After successfully negotiating the lakeside, we found ourselves in roads that looked worse than feeder roads, or farm-to-market roads. Apparently, Ondoy caused all of these, washing away the asphalted roads, with several sections of higher ground eroded or washed out. I swear the trip took on the nature of a 4×4 trek around Pinatubo.

Road leads to the water's edge 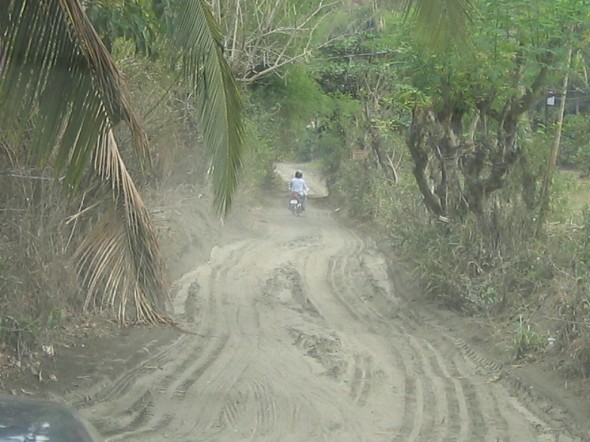 My 4x4 trail : no government here?

The place is difficult to reach, to say the least. Thus, within Buso Buso, where, roads are for 4×4 trekking, there are no shops. Ambulant vendors try to make a living in the area. An entrepreneur thought that maybe a mobile grocery and sari sari store is just what is needed in this place.

We stopped at past 12 noon in a “pondohan” where I saw kaldero at kaserola and tables and chairs. We ordered puso ng saging, one slice of pork chop, and one slice of afritada. Plus rice and 2 bottles of Coke. The bill went up to a princely P100.00 flat. 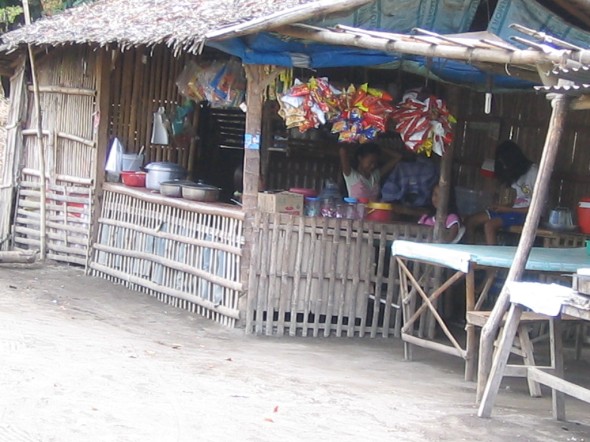 Moving on, it felt like driving in an uninhabited area where we only followed trails.Next we came to an area where roads got a bit better.

Fishing net : the lake is a source of livelihood

Coconut leaves are dried, for fuel

Until we finally saw civilization. Within Agoncillo proper, I saw some really beautiful homes. Big homes. Contrast this to the next barrio, just where we came from, which seemed like no man’s land.

We left Agoncillo for Lemery, and drove back to Tagaytay. Still, I couldn’t believe that a 4×4 adventure trail existed almost within my Tagaytay backyard.

With nothing to do, I thought I’d check out my neighborhood 4×4 trail. I found the water level in the lake has gone down, There is no more bend where “the lake meets the road”. Workers are doing the pavement, and, hopefully, the roads will be passable even after a typhoon. But when I say passable, I mean just that – – – passable. I couldn’t believe it that way after Ondoy, and even after the elections, the roads have not improved a bit. Now, I have concluded this may not have been caused by Ondoy. The flooded lake, yes. But not the status of the road itself. The roads are so bad you would wonder if this area is within the jurisdiction of any local government. It is as if the governor does not know that such road existed in this first class province. It feels like there is no mayor, no congressman. Or maybe they are not part of the Philippines. On a positive note, I will always have a place for 4×4 experience.

This time, too, I went on to Lemery town. Lemery is 45 kilometers from the Tagytay rotunda starting point., to complete the trip around the lake.

From Lemery, I drove to Lipa via Batangas, took the STAR tollway and made my exit in Tanauan, heading back to Tagaytay via Talisay.

From the Tanauan exit, the first barangay is Santor, and then Talaga. A good place to visit is the Mabini Shrine, the birthplace of the Sublime Paralytic. 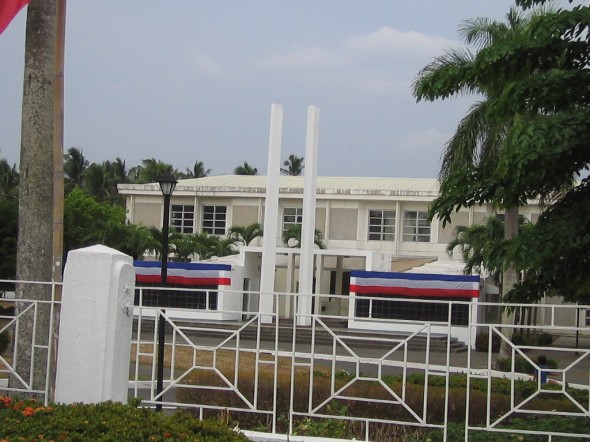 a shrine in Talaga, Tanauan, built where Apolinario Mabini was born

A few kilometers away and you will get to the town of Talisay. Talisay is a destination in itself among garden enthusiasts. There are hundreds of backyard gardens selling plants – – from trees, to shrubs, from fruit trees to  ornamentals. I bought a mango tree from Talisay, and right now the tree has at least 50 mango fruits waiting to ripen.

Corn on the cob by the Talisay roadside

I took a quick snapshot of the Talisay Municipal Hall and headed back to Tagay tay, this time thru Ligaya Drive.

Along Ligaya Drive, one can see locals on horseback, fire trees on the road, and three areas being developed by Filinvest as mid-to-high-end residential subdivisions. The 3 areas are collectively called Leuna de Taal. The area nearest the lake is called Orilla, with easy access to the exclusive clubhouse on the lake. The Bahia is at the midpoint of Ligaya Drive, and has views of the lake. The highest point among the Leuna de Taal properties is now being developed as a townhouse community. Units are sold for P3.6 million, with the splendid view of Taal Volcano and the lake as bonus.