When one thinks of Davao, exactly what images do come to mind? As for me, Davao is durian and marang, Luz Kinilaw, Samal Island, the Shrine in Matina, Philippine Eagle, orchids, the San Pedro Cathedral, the no-smoking rules, and the well loved Mayor Duterte.

they don't send smokers to jail, as long as you smoke responsibly - - in designated spots away from non-smokers

Well, the 2010 elections have just been concluded and the mayor-elect is Inday Nita, a daughter of the incumbent mayor. Thus it is expected that the peace and order enjoyed by Davao will continue and will make this largest Philippine city  even more attractive to visitors.

It was a Sunday so I visited the Sto Nino Shrine in Matina. If one needs a place conducive to praying, and communing with nature, the Shrine is the best place to go to in Davao. 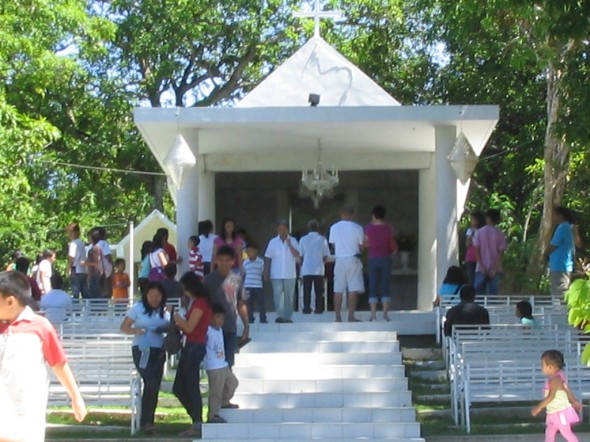 the grounds around the Shrine

On the road opposite the Shrine is Jack’s Ridge, a destination in itself, particularly popular for drinks at night when you can have a good view of Davao City at night. They were fully-booked when I went, all three rooms. Book ahead at (+6382) 2978830 to 31. website http://www.jacksridgedavao.com 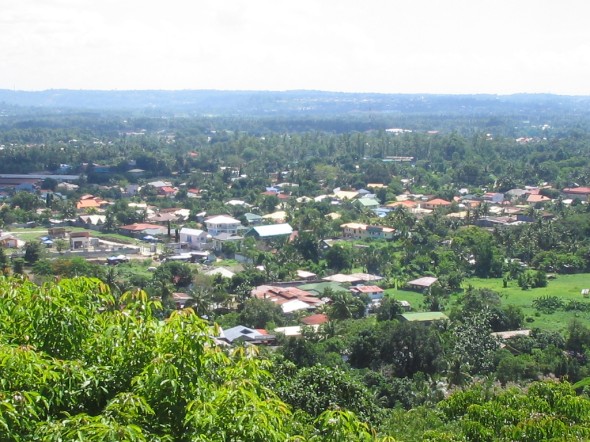 the city as seen from Jack's Ridge 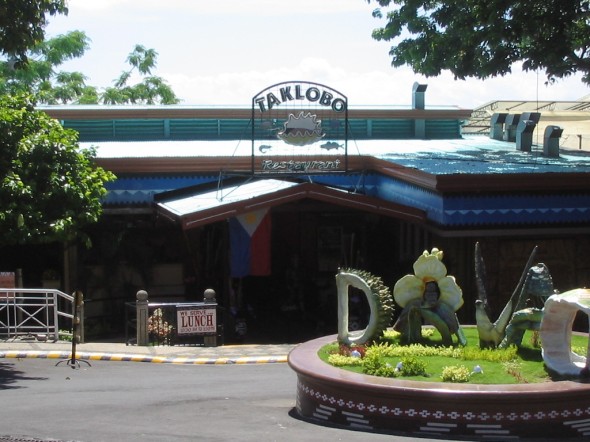 Bar with a view

pool on the ridge 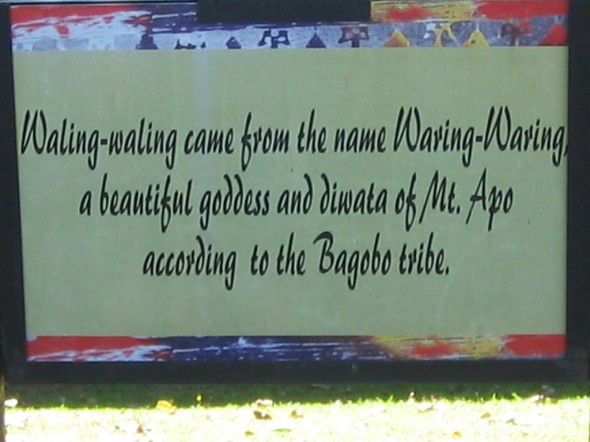 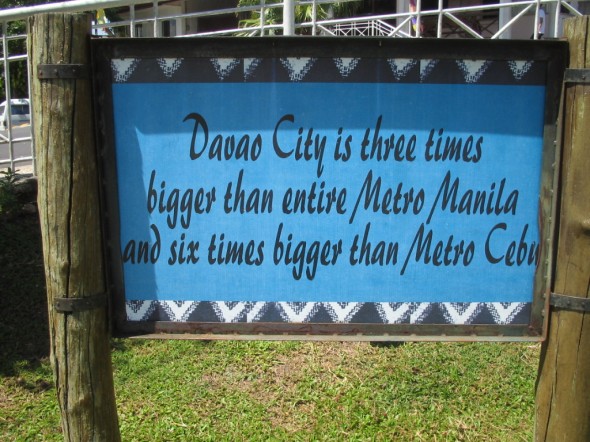 A relatively new attraction is Baywalk, with a reproduction of Michaelangelo’s famous sculpture “David” as the most prominent, albeit much talked about and controversial centerpiece. Apparently, the locals were scandalized by the statue of a man with his genitals uncovered, that at some point they actually covered David’s private parts. Maybe the thought of Michaelangelo rising from the dead made them re-think this “solution”. Now, David, in bronze and bigger than the original housed in Florence, Italy, stands proud, showing to one and all his manhood. The park also features a lagoon with sharks on the water, and a small zoo with some ostriches in cages. 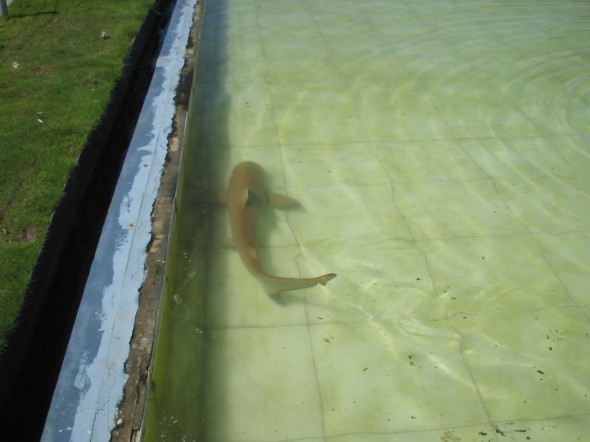 real, aquarium-variety sharks on the lagoon

from the Baywalk, a view of bathers at Emar's Beach, one of many low-end beach resort in the area known sa Times beach

Shopping in Davao is like any big-city shopping. I checked out SM Davao, plus the huge NCCC Mall. At SM Davao, the fastfood staff were attired in their best Filipiniana, the day of my visit being the celebration of the Philippine Independence Day. There was also a huge exhibit mounted by the Philippine Eagle Center, with real live eagles brought into the mall for public viewing. Plus photos of the birds taken by ace photographers, also on exhibit. I will blog separately about the Philippine Eagle Center.

a chance encounter :eagles at the SM Mall, limited run. Terry is an Australian who came to the Philippines just to see the Philippine eagle, and stayed on as a volunteer at the center

Meanwhile, I was floored to see this signage at the men’s room of SM Davao, 2nd floor. Unthinkable for a mall that has become so big because of the patronage of its customers, more than the value of its tenants. Calling SM Malls ! 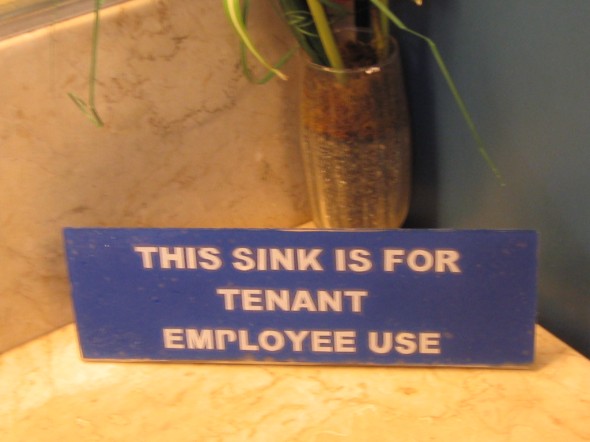 A visit to Davao is not complete without saying a prayer at the San Pedro Cathedral across from the City Hall. Never mind that the church was bombed by extremists in 2003. I guess it is better to leave this planet while praying in such great place of worship, just in case.

I also checked out the restaurant row beside the Peoples Park. Banok Banok apparently means “baboy at manok”. 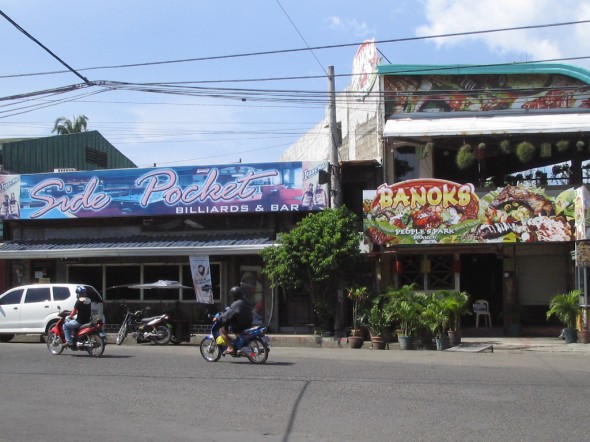 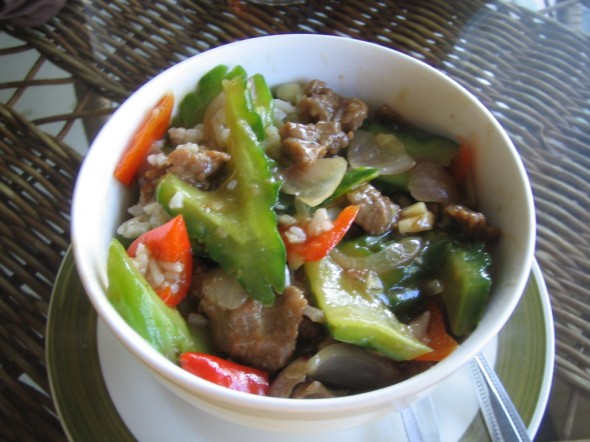 ...where you can buy a P70 ampalaya con carne rice topping

You can also try Tsuru, a Japanese restaurant that shares a common kitchen with Hanoi, serving Vietnamese dishes.

Luz Kinilaw Place is still there along Magsaysay, and so are the regular customers. I had the usual kinilaw na tuna, and the famous inihaw na panga. This time, I sat closer to the street instead of what used to be the prime seats facing the sea. The sea view is gone, and in its place are roofs of squatter-type houses. The kinilaw, as expected, is still great. And so is the panga, the smallest of which is still impossible to finish. The driver was happy to take the panga home.

same old set up, minus the sea view

and the raison d' etre : kinilaw

Within a few steps from Luz Kinilaw is the row of fruit stalls with the prominent signage Magsaysay Fruit Vendors Association. I savored a small durian for P85, and moved to the next stall for my favorite marang. There was no small marang that was ripe enough to eat, so I bought one that is nearly 3 kilos for P135. Again, the driver was happy to bring home more than half of the fruit, because these fruits can not be brought into the hotels in Davao.

glorious durian, but they don't allow inside hotels !

This is a popular park at the restaurant area near Casa Leticia and at the back of Apo View Hotel. The park is , typical of the entire city, a no-smoking park.  It is well maintained, with interesting giant stone sculpture depicting barrio life  and fishing village scenes. A section of the park is a gardener’s haven, with clinging vines and orchids within the area around a pond. Interestingly, a gym operates from this area, albeit out of place. Still, it is a clear message that the park is for everyone’s use. 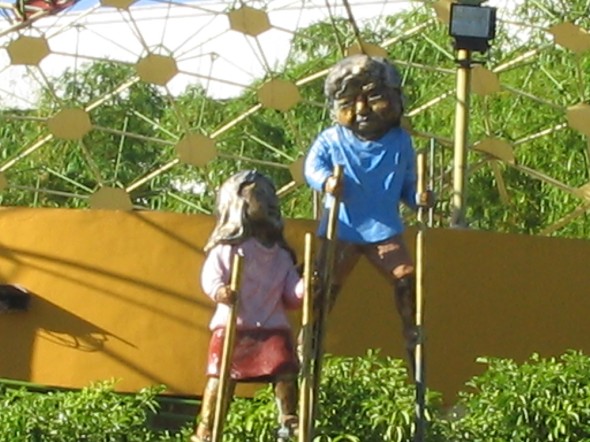 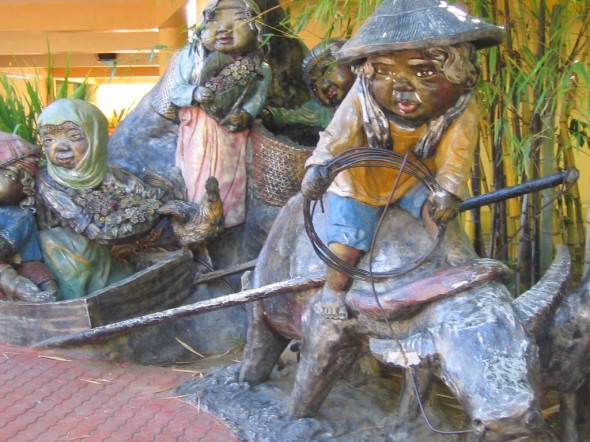 at the park, carabao for transport (stone sculpture)

the park is for joggers, and a venue for sports events 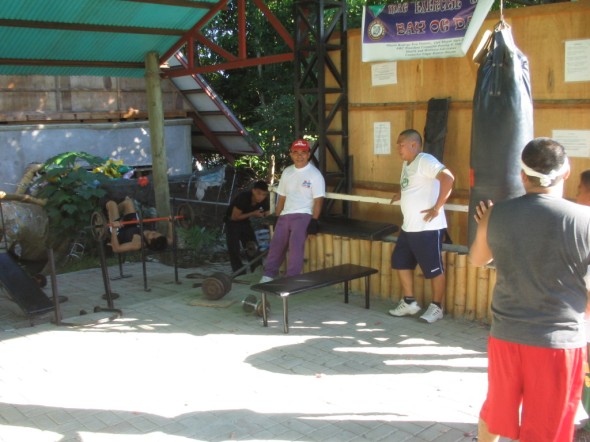 a gym in a quiet corner 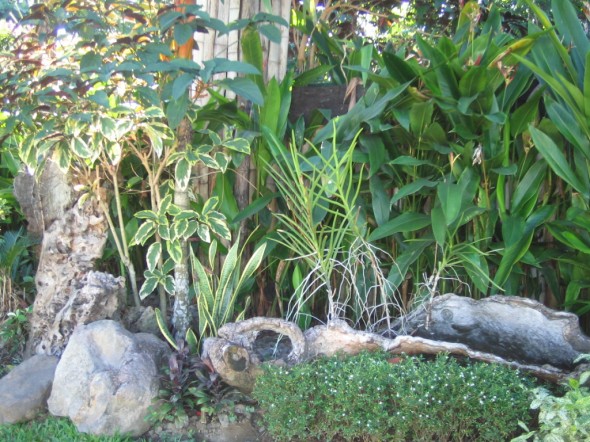 a garden enthusiast's haven, too

In my previous visits, I have stayed in the better hotels in the city. From the Maguindanao Hotel, the premier hotel in the 7os, but is now closed, to the Apo View Hotel, to the new 5-star Marco Polo. I have also stayed at the Waterfront, even before when it was just Davao Insular. This time I stayed at the Casa Leticia, a good value mid-level hotel.

Casa Leticia along J. Camus Street has rooms that are as good as 3-star hotel rooms. A de luxe room I checked into (P2,500) had a queen size bed, television, mini bar and ref, a workdesk, a coffee table, while admittedly a bit cramped within the small space. The toilet had complete toiletries like toothbrush and toothpaste, soap, shampoo, bath towels, floor towels, hair dryer, and an old-fashioned retractable mirror. I would say I got the best value this time. Clean comfortable room at half the cost of my previous hotels. Contact Casa Leticia at (+6382) 2240501.

Juliet at the front desk, with Benjie the bellman

room rates include breakfast of your choice 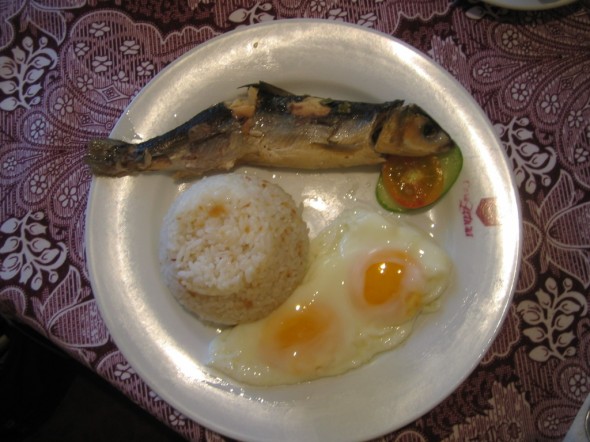 my day 1 breakfast : home made sardines, the house specialty 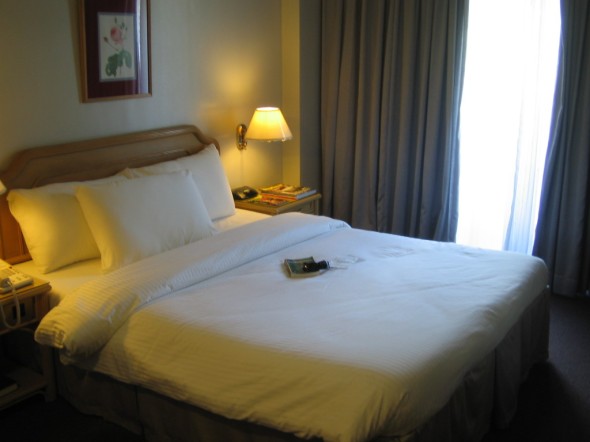 I went around to check my old hotels.

Apo View has refurbished and is clearly not letting the newer hotels take over its clientele. It has the look of a new hotel, with a huge glass wall beside Cafe Josefina that makes the whole lobby area look green thru the foliage outside the glass wall. Even the pool on the ground level has moved, to give way to restaurants and generous garden spaces. 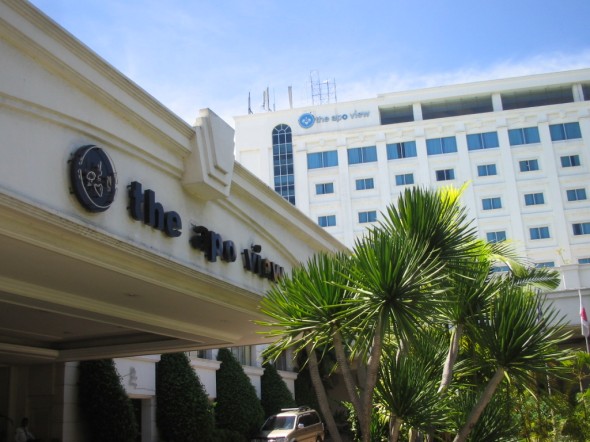 Apo View: more beautiful than before

Cafe Josefina, at the end of the lobby

Marco Polo is humming with brisk business. Clearly THE hotel in Davao.

The Royal Mandaya is also quite busy, getting its fair share of business. I guess that is because tourism in Davao is on an upswing, with business going to as many establishments as possible.

On a tip from the taxi driver, I also checked out Seagull, a beach accommodation in the down-market area called Matina Aplaya. Access is through a thickly populated area. When on a budget or when going with friends for a swim nearby, this place is good enough. Away from the city center, but only P85 by taxi. Contact (+6382)3010100, 3010097

the beach at Seagull 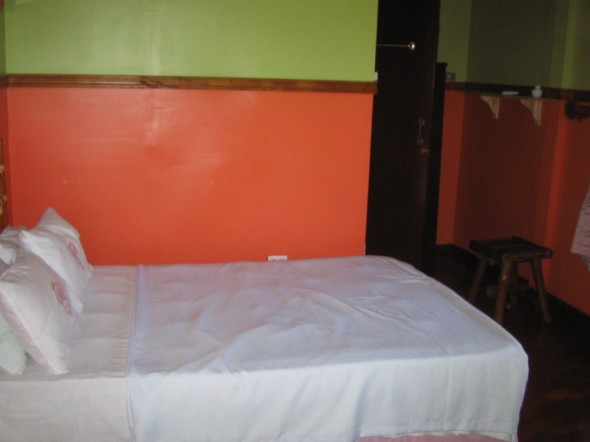