Returning from a Bicol road trip, a friend suggested we pass by his hometown of Atimonan. It was getting dark and the merienda and halo halo he asked is relatives to arrange for our group seemed at first to be “wrong timing” because we were going to get there after dark. Yet, to our amazement, the merienda was so nourishing and so relaxing that we had energy to shoot the church. And we were so privileged to visit the church all lit up, a special accommodation from the parish priest. Here are photos of this beautiful church called Our Lady of the Angels. 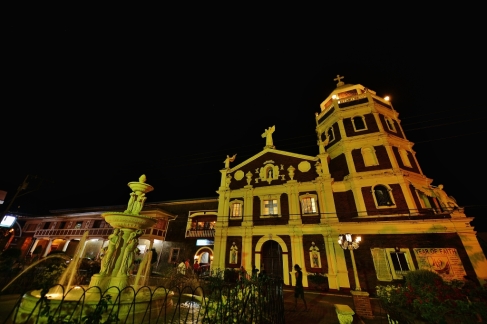 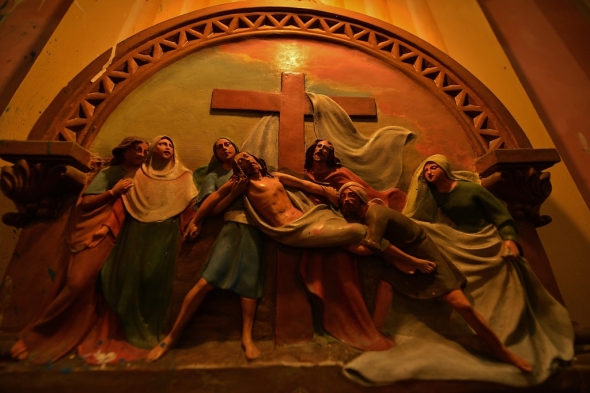 We then went into the adjacent church museum. 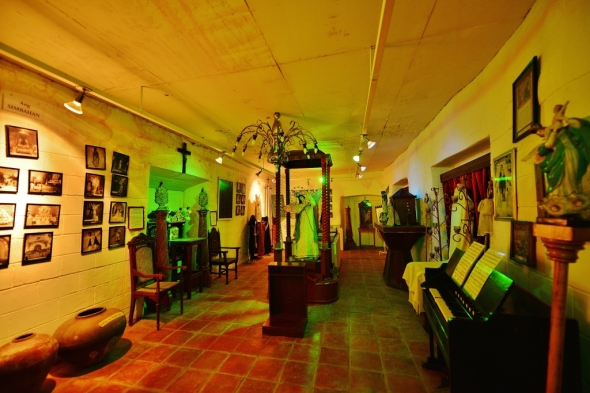 And the merienda? Well worth the trip. 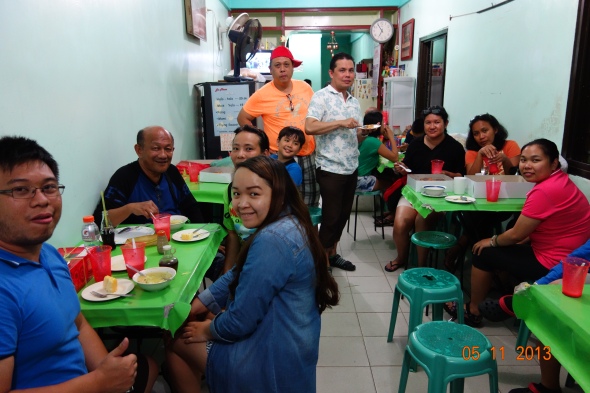 HOW TO GET THERE:

Several bus companies ply the Quezon-Bicol route. Tell the driver/conductor to let you get off in Atimonan. When taking a private vehicle, drive south past SLEX and on to Lucena. Pagbilao is the next town from where you drive up the Quezon National Park, known to travelers as “Bitukang Manok” duie to the xtremely circuitous  route and steep curves. After this exciting ride, you will find yourself in Atimonan. Turn left to get to Atimonan town proper.

You won’t believe this. I left my Tagaytay house with permission from my wife to go to Baguio to spend Holy Week there. As we were driving along Silang to SLEX, I toyed with the idea of going to Baler and Casiguran instead. Called my friends for accommodations. I was told the Vice Mayor of Casiguran will take care of me if I don’t get a room.

But as we approached SLEX in Sta Rosa, I just instinctively decided we will head south. Bicol maybe. Crazy, but those who know me will not be surprised that I travel without a fixed destination in mind.

No, the people are not nuts. But Quezon province probably has the most number of coconuts among all the provinces of the Philippines.

We stopped for lunch in a carinderia past Pagbilao, just before the ascent to the Eme, that zigzag road that leads to the Quezon National Park. Others mistakenly call this the Bitukang Manok, which is another long zigzag road leading to Daet in Camarines Norte.

After Atimonan, we drove along the coastline dotted with beach resorts. Next town was Plaridel, formerly known as Siain. Next was Gumaca, where we decided to stary for the night. We asked around and were told to proceed to Nellie’s Hotel, beside the Petron staion. The mestiza lady at the table outside the hotel door was munching on fresh jack fruit, and offered me some. I asked if she was Nellie, and said yes she was. She works at SunLife, and is managing the hotel which she inherited from her parents.

The rooms are cheap but not clean. For P500 per room per night, I did not expect even a 1-star standard of cleanliness. That is why I always bring with me my own linen, pillows, blankets and toiletries. What the hotel lacked in maintenance, they more than made up for in hospitality.

That night, I had drinks at the hotel cafeteria with Nellie’s husband, their son Jong who, in his travel to Vietnam knew my friends there. There were lots of stories to exchange. We were joined later by still another guest whose family was already asleep. They were going to Daet. And even later, we were joined by two call center guys who were also on a roadtrip. They drank Ginebra while I finished my 8th bottle of San Mig Light. When there was no more SMB, they shared their Ginebra with me. I learned that the guys and Jong went out much later in the night, after I went to bed at 2:30am. I woke up feeling normal, without any hangover. I was also surprised myself. Then we checked out and drove to Bicol.

We planned to take the 4×4 to Catanduanes Island via roro, so we first went to Tabaco Port to check how we could do that. After the clearances, we were set to take MV Calixta at 1pm the next day.

So we drove back to Legazpi and phoned a friend. My friend directed us to a brand new hotel owned by a mayoralty candidate. The hotel is called La Roca, near the airport. It is a beautiful hotel and at P2,000 per night is a steal. I figured a room like this would cost at least P3.000 a night, maybe even more.Maybe it was an “introductory”rate? Hmmmm, we will see.

my room at the brand new La Roca Veranda Suites

My friend invited me to Embarcadero, the center of nightlife in Legazpi. This is their equivalent of Greenbelt and Eastwood combined. Live bands play on a stage al fresco, and one can pick a table outside and order drinks while watching the performance. Several Manila-brand restaurants are in Embarcadero.

nowhere but to Embarcadero for a fun night

We were at the Tabaco port at 11 am, to allow for boarding of vehicles. I had to get myself a ticket to ride the ferry since only the driver of the vehicle gets in for free. Travel time from Tabaco to the Catanduanes port of San Andres was 3 hours. Getting off the ferry, I called my friend who is the daughter of the former governor, who promptly invited me to stay in their beach house for the night. Kosta Alcantara is huge and seemed like a hotel, with several air conditioned rooms, and an open area that can probably sit 100 people over dinner. We had grilled dorado fish for pulutan over San Mig Light. And dinuguan, bopis, etc for dinner.

I suggested to my hosts that I stay in the center of town the next night, even as I loved the place. So the following morning, we drove off to different towns, passing Bato with its beautiful church facing the sea, Baras where I had merienda on a carinderia by the sea, and in Puraran, most famous among surfers, and is “the” destination in Catanduanes. From Puraran, we drove to Gigmoto where we found spectacular views of mountain and sea. In fact, Gigmoto can be Caramoan and Boracay rolled into one, if facilities can be put in place. The road is also largely unpaved.

From Gigmoto, we found ourselves in Viga, and then San Miguel before going back to the town center in Virac.

We stayed at Catanduanes Midtown Inn. I got a Royal Room for P1,400 a night, and a single room for P680 a night for my driver. Pretty nice hotel. I actually watched the Viernes Santo procession from the veranda outside my room.

The trip back to Tabaco was from the Port of Virac, via MV Penafrancia. It was a larger boat than Calixta, but the travel was one hour longer because of the different sea route. Still, it was a more pleasant trip than the trip to Catanduanes.

We had to stay in Legazpi for the night. This time I stayed in the newly opened St Ellis Hotel, the former La Trinidad Hotel. I went there because La Trinidad used to be my favorite hotel in Legazpi, where I once checked into its Captain’s Suite on a trip to Legazpi just to watch Mayon Volcano “in action”, watching the lava flow at night, years and years ago. ﻿﻿

﻿There is no trace of the old hotel, except perhaps for the second-floor pool that could not be relocated, and the one and only elevator to ferry guests to higher floors. The lobby alone will tell you it is a new hotel, having taken up the space of the adjoining mini mall to create a spacious 5-star lobby. The restaurant at the ground floor also looks and feels 5-star. I thought they were a sister hotel of my favorite Naga Hotel (Avenue Plaza), but I was told they were being operated by Genesis, a professional hotel management company.   I took a junior suite at nearly P6,000 per night. It was comfortable, and definitely a step up from the old La Trinidad.

St Ellis Hotel – – – no trace of the old La Trinidad

the new lobby extends to what was a mini mall 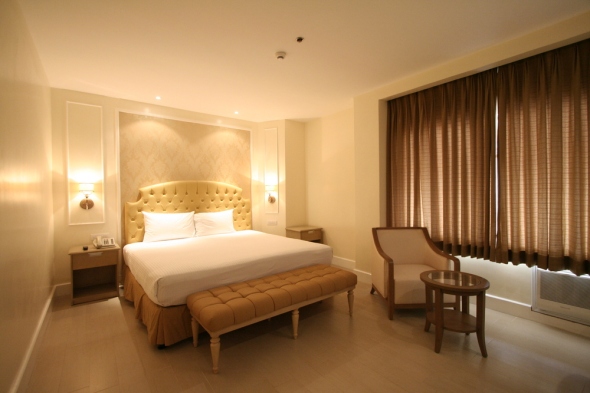 Another good hotel is Pepperland, where I used to stay until I decided to try the new hotels La Roca and St Ellis. Pepperland is still a good place to stay, especially if you want some entertainment right in your hotel. The bar at the ground floor is always packed, and even upmarket locals go there for the band that always plays good music. Just be sure to get a room farthest from the bar if you can’t sleep unless it is totally quiet.I checked into a VIP room the last time I stayed, but realized that the rooms at the ground level, by the courtyard, are still the better (yet cheaper ) rooms. Unfortunately, these rooms were booked then.

My driver was booked at Tourist Inn, near LCC Mall,  where air conditioned rooms cost P1,000 overnight. When my driver picked me up from St Ellis, I went to Tourist In to check this budget hotel. It is in a busy part of the city. The rooms are not 5-standard clean, but ok. Definitely good value at P1,000 per night, and I figure I do not mind staying there when I want to extend my travel funds.

Lunch when we arrived in Legazpi was in one of my favorite restaurants, Small Talk.  Make sure you order what people go there for : pinangat pasta. For the uninitiated, pinangat is what we Tagalogs call “laing”. Do not try to visualize it. You can even close your eyes while savoring this dish. And you will swear you will have it again, and again, when you are in Legazpi.

Get to know about Small Talk Cafe on their facebook :

We decided to have lunch in Naga. On a tip from a local, we went to Basilica Kaffee Haus inside the Basilica compound. I immediately loved the place. We sat outside, in the fenced in area. There were other tables set outside. I went inside to use the toilet and saw that the place resembled a not-trying-hard Cafe Adriatico.

The menu was good. The food great. Seafood paella which could be had by three was only P180. We had as side order tuna sisig, which complemented the seafood paella well.

I wanted to take the trip to an island off Gumaca called Quezon Town in Quezon Province. I was told a resort has been built and therefore there are accommodations in the island. I am saving that for another trip.